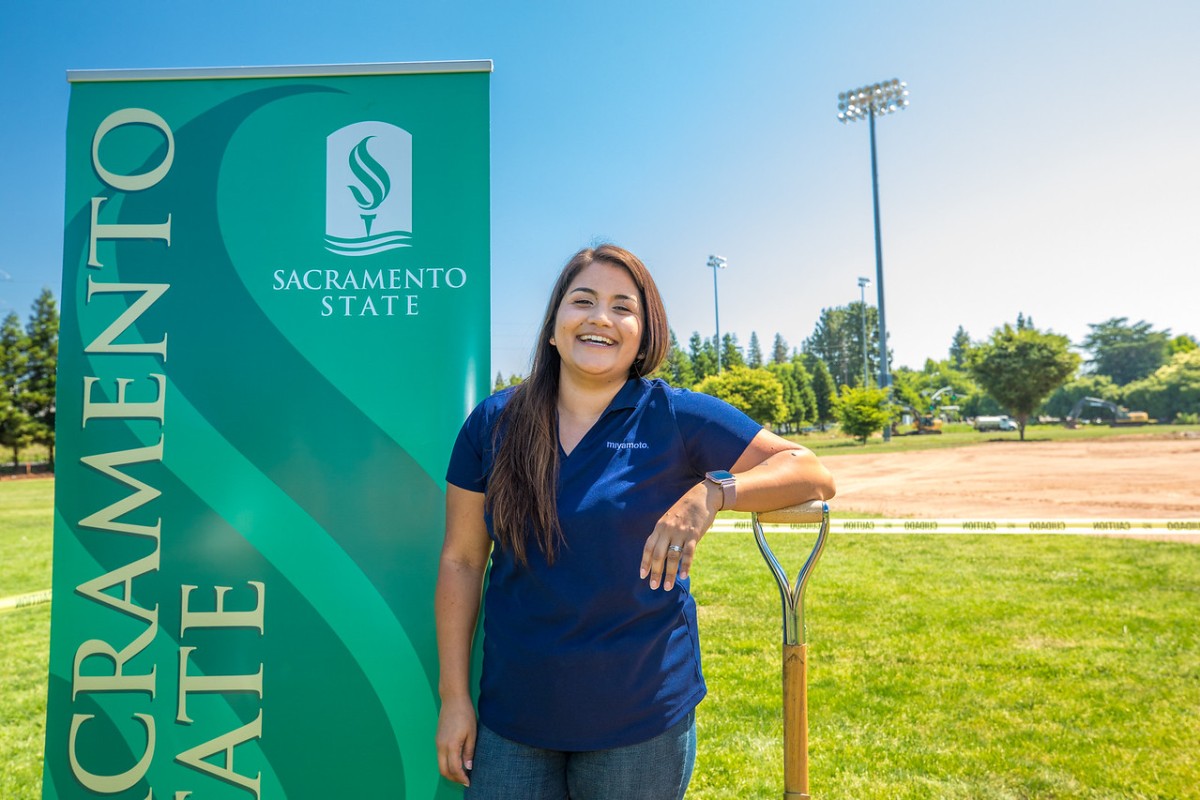 Leticia Valenzuela always had been good at math, so when Sierra College held an engineering seminar the summer after she graduated high school, her friend suggested she attend. She didn’t know much about engineering, but that changed quickly.

“There was a structural engineer who was female, which is rare, and she told us about what she does and did a little exercise with us and had us build something, and it really struck a chord with me,” said Valenzuela. “I really enjoyed it, and that’s literally the day I said, ‘You know, I want to do what she does.’ ”

Valenzuela eventually transferred from Sierra to Sacramento State, where she earned her bachelor’s and master’s degrees in civil engineering before starting a career as a staff engineer for Miyamoto International, a global structural engineering and disaster-risk reduction firm.

Her current project with the firm hits close to home: She’s performing the design calculations for Sacramento State’s Hornet Commons, an eight-building student housing complex that broke ground this summer, handling the complicated math needed to ensure each building’s walls and foundations can withstand earthquakes, wind and anything else that may come their way.

In other words, Valenzuela literally is helping to build the campus where she spent five years learning to be an engineer.

“When I first heard that our office got this project, my first thought was, ‘I want to work on that,’ ” she said. “It’s all full circle. I feel like I’m giving back to the school I went to.”

Growing up primarily in Sacramento and Yuba City, Valenzuela was no stranger to buildings and the housing industry: Her father works in construction, and her mother is a real estate agent. The first in her family to attend a four-year university, she initially planned on attending school in San Diego or Oregon. But the recession hit her parents’ industries hard, and when she graduated high school in 2009, she decided to stay local and attend community college.

That left her deciding between Sacramento State and UC Davis to finish out her bachelor’s degree. Sac State won out, she said, in part due to its dedication to hands-on, experiential learning. For their senior project, she and her classmates had the opportunity to submit a mock redesign of an actual railroad bridge in Calaveras County. She also participated in the American Society of Civil Engineers, serving as secretary of the student chapter for a year, as well as the Tau Beta Pi engineering honor society.

“I feel like I am well prepared (for a career), as well as you can be prepared, because you don’t know what you don’t know until you get out there,” Valenzuela said. “You think, I got all this education, and then in the real world, day by day you’re learning more and more. You build off everything you learned in school.”

She wasn’t thinking about grad school – even though her then-boyfriend and now-husband, Sacramento State alumnus Manny Valenzuela, suggested it – but a random encounter with a professor changed her mind. In an on-campus parking garage, she ran into her soils professor, Cyrus Aryani, who told her that her work was graduate level and that she should consider pursuing her master’s degree.

Aryani taught Valenzuela in an undergraduate and graduate course, and called her one of his top students. He said she aced his exams, an impressive feat “because my exams are usually tough, and hard to get 95-100.”

“She was very smart and she would grasp onto the topics very well, and she understood the material well,” Aryani said. “She worked hard and she always, as I recall, had a smile and a very positive attitude toward everything.

“I saw the potential. She was an excellent student.”

Valenzuela stayed at Sacramento State for her master’s degree while also beginning work at Miyamoto, where she was hired full time after finishing graduate school in 2017. She has conducted design calculations on several local projects, including Del Paso Elementary School in Sacramento, an apartment complex in Roseville, and a military housing facility in Mather.

“She’s very conscientious about what she does. She’s a quick learner, fairly detailed,” said Bob Glasgow, a principal at Miyamoto who earned his master’s in civil engineering at Sacramento State and also taught Valenzuela there. “When you’re studying and going through school, it probably teaches you about 10 percent of what you need to know for your career, so there’s a lot of on-the-job learning. You learn and build experience as you progress by working on many different projects, and she has definitely been doing that.”

Beyond her engineering work, Glasgow said, Valenzuela has given back to the community, helping to organize a Women in Construction volunteer event, and serving as a mentor for high school students in the CREATE Mentoring Program.

Valenzuela doesn’t dwell on the fact that, as a Latina in engineering, she remains a rarity. But she recognizes the impact she can have by showing young people that someone like her can succeed in the field, much as the woman at the Sierra seminar did for her back in 2009.

“I want people to get into the profession. I love it,” she said. “Someone gave a good description one time: Civil (engineering) is for the people. It’s for the community and civic-type things. Ultimately, that’s what we do. We’re giving back.”