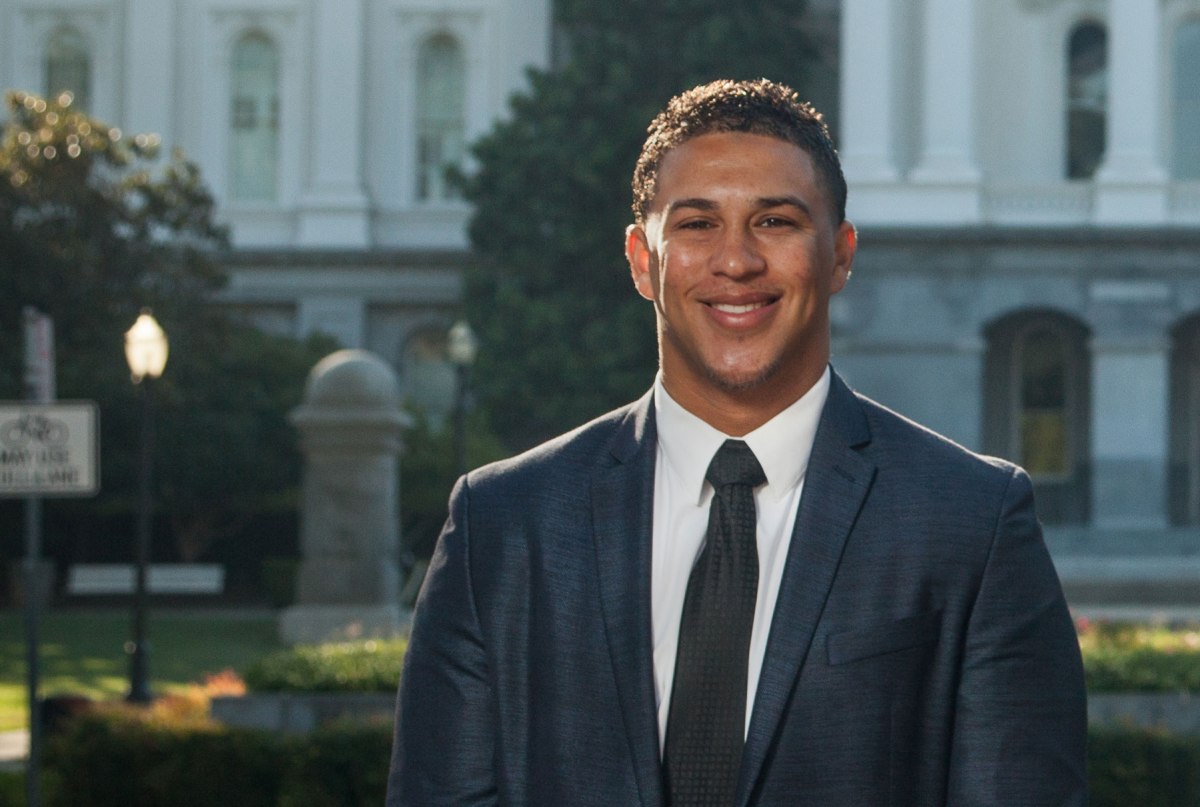 Growing up in Stockton and Sacramento, Michael Lynch M.P.P.A. ’11 knew he had a support system that many of his fellow young men of color didn’t – a system he credits with helping him earn two college degrees.

“I wasn’t the smartest, I wasn’t the most athletic, but I was provided unique opportunities,” he says. “As an athlete, I got a chance to go to colleges across the state, I got specialized tutoring, I had mentorship from my middle school days. I had a dad at home, which was huge. Barely any of my friends had dads at home.”

Today, Lynch is working to ensure that those like him have similar support – and similar opportunities. In 2013, he and fellow Sacramento State alum Michael Casper ’10 (Communication Studies) co-founded Improve Your Tomorrow (IYT), a nonprofit that works to increase the number of young men of color who attend and graduate college by providing academic support services such as academic support, mentorship, college exposure, workshops, and internships. The program has a presence at 10 Sacramento-area schools and serves nearly 700 students.

“I wanted to impact young men of color and help them get to and through college,” he says, noting that black and Latino men remain, on average, the lowest-performing students in the state. “Create the system that helped me, from college tours, to mentorship, to study halls, to internships. Wraparound support to make sure these young men have the skills they need.”

That support includes required weekly study halls, as well as monthly college workshops, community service projects, and team-building activities. IYT students visit college campuses and receive mentoring from IYT students currently in college – mentoring that continues even after they have been accepted into a college themselves. They are encouraged to apply to as many as 10 colleges – one of which must be Sacramento State.

The results have been remarkable. IYT has a 100 percent high school graduation rate, compared with 65 percent and 75 percent, respectively, for black and Latino males in California overall. Eighty-nine percent of IYT alums are accepted to a four-year college or university and 94 percent attend either a four-year or community college.

Running a nonprofit was far from Lynch’s mind when, in 2007 while a sophomore studying criminal justice at the University of Nevada, Las Vegas, in preparation for attending law school, a friend invited him to a campaign rally.

“There’s about 150 people in the room,” he says. “This guy gets on stage, and he’s talking about hope and change and what government can do to help others. And that was Barack Obama. That was his second campaign stop, and that got me thinking about how politics can be used to shape peoples’ lives.”

Lynch eventually transferred to Humboldt State and earned a bachelor’s degree in business administration, then was accepted into Sacramento State’s Capitol Fellows program. After a year of working at the Capitol, he enrolled in the University’s Master’s in Public Policy Administration program.

The faculty at Sacramento State “pushed me like no other professor or teacher had in my entire academic career,” Lynch says. also learned that passion can produce results. He also built important relationships that were key to getting Improve Your Tomorrow off the ground, including with President Robert S. Nelsen, who became an early cheerleader for the program.

“Education is a powerful tool – one that can lift families out of poverty and reduce inequality. Michael is living proof of Sac State’s mission. Not only has he shown remarkable dedication in earning two CSU degrees, but through his work with Improve Your Tomorrow, he is also helping to ensure that the path to a college education remains open for hundreds of young men who are following in his footsteps,” Nelsen says. “He is changing lives, he is transforming our community, and he truly embodies what it means to be Made at Sac State.”

In 2017, Improve Your Tomorrow and Sacramento State launched a partnership called IYT U aimed at increasing the number of black and Latino men who graduate on time and prepared to enter the workforce. The partnership, which launched as a pilot with 35 Sacramento State students and plans to expand to 50-100 students each year, received a $20,000 CSU grant to develop scholarships, retreats, tutoring programs, and other support.

IYT U students must continue to attend study hall and participate in community service and leadership training – and they are required to go back to their high school and talk about what it means to attend college.

Keylen Newsome, a Sacramento State junior studying economics, says joining Improve Your Tomorrow while a student at Valley High School in south Sacramento gave him a new perspective on college. Although his grades were good, he had become disillusioned with higher education – the levels of student debt, and a shaky post-graduation job market, for example. IYT helped him realize that, by attending college himself, he could gain the skills and experience necessary to help others and change the system, which he does today as the program director for the IYT College Academy at Jackman Middle School.

“I built stronger relationships with guys I already had friendships with,” Newsome says. “I found male leadership that I didn’t have growing up. I found a sense of belonging. I was always involved in different organizations (in high school), but IYT is the only one I’m still involved with.”

It’s precisely the cycle Lynch envisioned when he helped found the organization five years ago. Provide support to high school students to help them get into college, so that they can in turn support the people coming up behind them.

“Education was my gateway, but so few people who look like me have those opportunities,” Lynch says. “We wanted to create an intentional opportunity to make sure these young men of color were supported.” 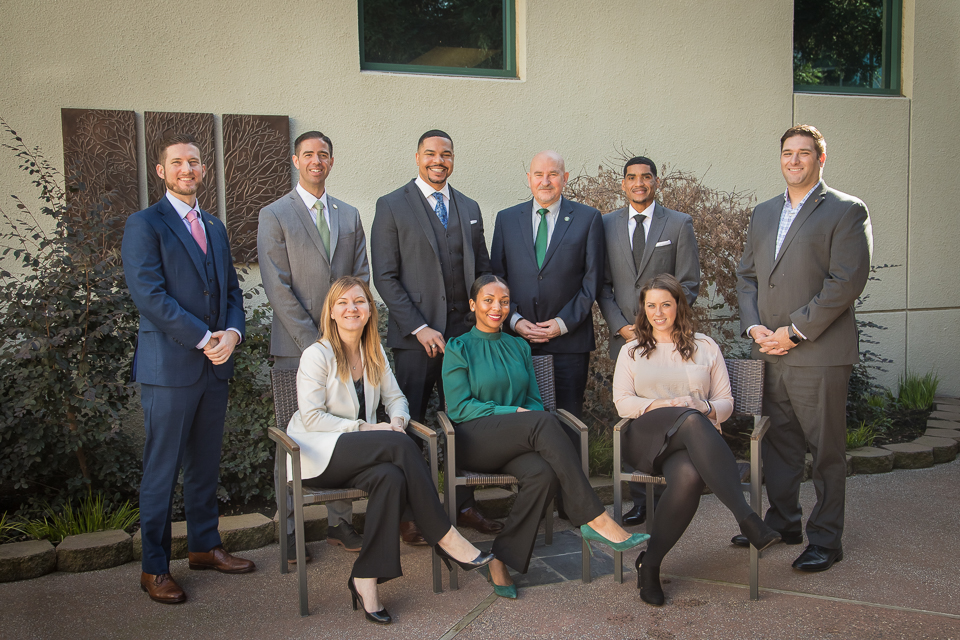 When the Sacramento Business Journal announced the full list of its 2017 “40 Under 40” last fall, Hornets were very well-represented. Nine of the 40 individuals on the list were Sacramento State alums, and this week they were celebrated on campus during a luncheon hosted by President Robert S. Nelsen.

In the front row, from left, are Annie Amaral ’01 (Communication Studies), partner at Downey Brand LLP; Veronica Smith ’01 (Business Administration), senior development manager for the City of Sacramento and founder of Dress for Success Sacramento; and Megan Laurie M.S. ’10 (Recreation Administration), director of development for WEAVE Inc. Not pictured is Koi Rivers ’08 (Communication Studies), founder and principal strategist at The Koi Rivers Experience.

The full 2017 list can be found on the Sacramento Business Journal‘s website (subscription required). Full profiles are being published at https://www.bizjournals.com/sacramento/topic/40-under-40.

Sacramento State President Robert S. Nelsen and two University alumni are among the 19 individuals selected for the City of Sacramento’s Technology Council, an advisory group that will provide input to the Mayor’s Office of Innovation and Entrepreneurship, the Sacramento Business Journal reported today.

Along with Nelsen, Amy Tong ’94 (Management Information Systems), MBA ’98, and Ryan Montoya EMBA ’16 will serve on the committee, the latest example of how Sacramento State is playing an important role in the Capital Region’s growth. Tong serves as director and chief information officer for the California Department of Technology. Montoya is the chief technology officer for the Sacramento Kings.

As CTO of the most populous state in the U.S., Tong is responsible for keeping technology up and running for more than 130 government agencies, as well as providing strategic guidance for California’s IT programs and policy. Montoya was a driving force behind making the Kings’ new arena, the Golden 1 Center, one of the world’s most technologically advanced.

According to the Business Journal, the technology committee had an introductory meeting last week and next meets in February. Recommendations for the unpaid positions were made by the mayor’s innovation office and approved by Mayor Darrell Steinberg. The council was created in 2016 under then-mayor Kevin Johnson.