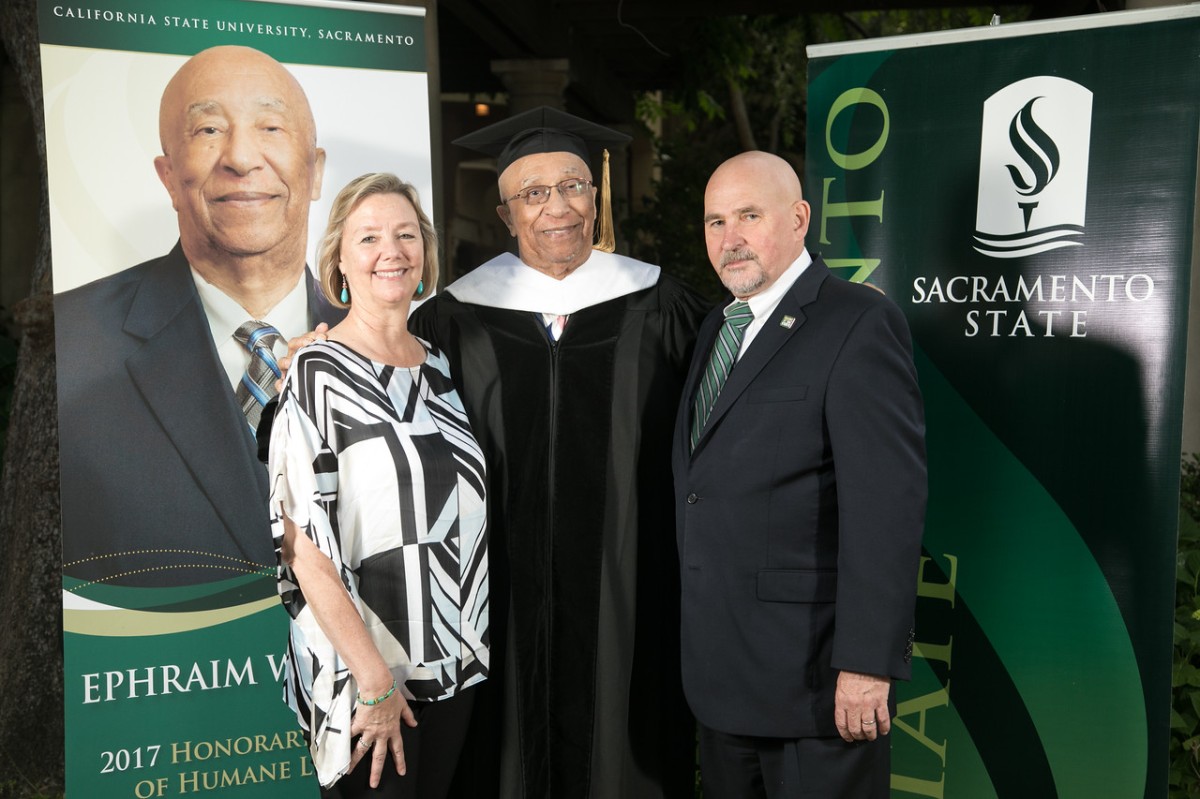 Ephraim Williams, center, stands with Jody and President Robert S. Nelsen during an event in his honor earlier this month.

Ephraim Williams, who leads the St. Paul Missionary Baptist Church and is the Sacramento region’s most senior pastor, will receive an honorary doctorate from the CSU at Sacramento State’s May 19 Commencement ceremony.

Williams has been at the helm of the Oak Park church since 1971, growing it from 133 members to more than 4,000 today, making it one of the region’s largest congregations. During that time, he has performed more than 900 marriages, 2,200 funerals, 2,100 baptisms, and 6,100 sermons while becoming, in the words of the Sacramento Bee during an article last year celebrating his 50th year as a pastor, “a major force in Sacramento civic and spiritual life.”

You don’t need to look farther than around Oak Park to see evidence of his impact. The Ephraim Williams Family Life Center – which promotes physical fitness, proper nutrition, recreation, health, and wellness – is adjacent to St. Paul church, and Ephraim Williams College Prep Middle School is close by as well.

Williams participates regularly in the CSU and Sacramento State’s “Super Sunday” effort to encourage college enrollment. He also spearheads the St. Paul and Oak Park Community Outreach Program, which provides recreational, educational and family support programs, including an after-school tutorial program, emergency assistance, health and wellness programs, a culinary program for at-risk youth, and summer programs for children and youth. He also has served in community organizations such as the Sacramento Baptist Ministers Conference, the Sacramento Urban League, the NAACP, and the Sacramento City Unified School District, and also was instrumental in changing the name of Sacramento Boulevard to Martin Luther King Jr. Boulevard.

Williams received the 2014 Peace Award from Sacramento State’s Center for African Peace and Conflict Resolution in recognition of his “exemplary leadership in building bridges between religious and civic life in the Sacramento region.”

Williams will receive an honorary Doctorate of Humane Letters. Honorary doctorates recognize excellence in areas that benefit humanity, CSU campuses, the state, nation, or world. They are conferred by the CSU Board of Trustees jointly in the name of the CSU and Sacramento State. For a full list of past winners, visit csus.edu/commencement/honorarydoctorate.

Writer and content producer at Sacramento State, writing about all things Made at Sac State. View all posts by Jonathan Morales