Truitt plays Rebecca “Rebel” Knight, an Oakland cop who becomes a private investigator after her brother is killed by police officers. The show blends ’70s-era “blaxploitation” themes with contemporary settings and issues, including Black Lives Matter. 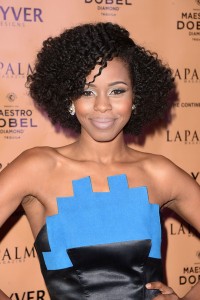 The Sacramento Bee recently profiled Truitt ahead of the series premiere, detailing how a veteran theater actress with little television experience was able to wow director John Singleton and win the part.

“It’s nice to know I do have something people find intriguing,” Truitt told the Bee. “Being from south Sacramento, growing up having a hard life and being a sista can work to my advantage.”

In an interview last year with Sacramento State, Truitt said she didn’t consider a career as an actor until one of her professors encouraged her to join her first play.

Rebel airs Tuesdays at 10 p.m. on BET. Truitt will return to Sacramento on April 29 for an event hosted by the California Film Festival.

Writer and content producer at Sacramento State, writing about all things Made at Sac State. View all posts by Jonathan Morales